It’s a constant source of both amusement and bewilderment to me that almost everything that ‘science’ has told us about wellbeing is wrong.

The last 50 years have been a total disaster from a health perspective; this graph shows the rates of obesity in the US. 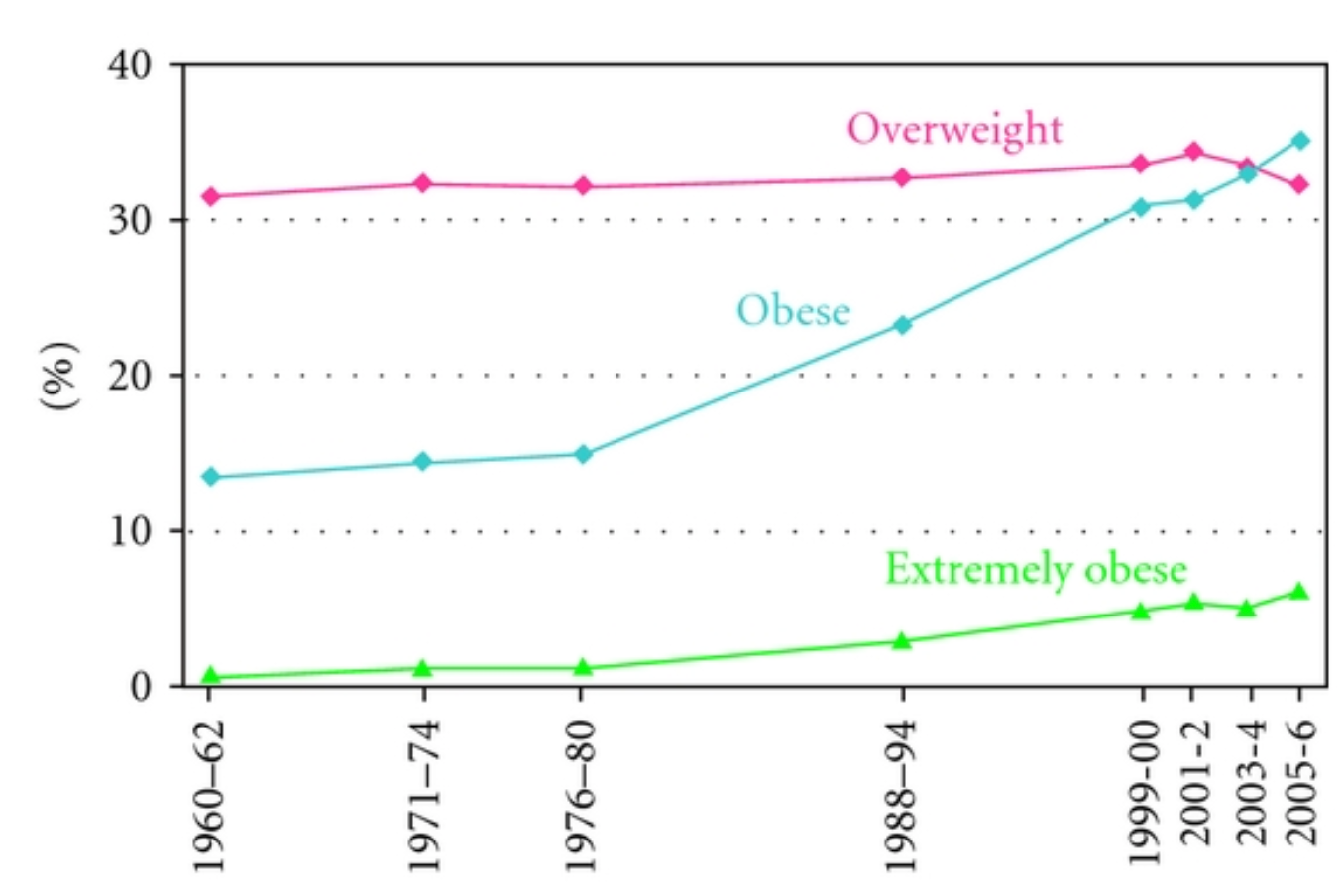 That the inflection point in the late 70s and early 80s coincides precisely with the timing of the change in the official nutritional guidelines - which remain much the same today - is likely no accident. Those changes included avoiding fat generally and saturated fat specifically, and replacing them with vegetable oils and plenty of carbohydrates, especially grains.

I list below my favourite ‘top 5’ myths. The criteria for inclusion are that they are

In the style of James Randi, I will take a £1 bet on any or all them being largely rejected by the year 2040.

1. A calorie is a calorie

This idea assumes that we are like little furnaces, energy in, energy out and that the only impact food has on us is its caloric value. So 100kcals of chocolate cake has the same metabolic impact on us at 100kcals of broccoli. Unsurprisingly, however, the quality of what we eat has a significant bearing on our short- and long-term health outcomes.

This falsehood is helpful for the manufacturers of low quality, high margin ‘junk’ food which might give some clues to how it sustains.

I do understand that there is a simple logic here. Fat is fat, and so is body fat, and we are what we eat after all. In the 20th century, we discovered that a gram of fat has about 9kcals of energy, whereas protein and carbs have around 4.5kcals - so fat is twice as caloric gram-for-gram. But no-one believes that the complex, multiple overlapping systems that our bodies use to regulate our appetite and metabolism are based solely on the mass or volume of the food we eat - do they?

Question: How do we make animals fat? Hint: it’s not my feeding them fat, which leads us nicely to…

3. Grains are good for us

Good old “heart-healthy” grains - especially those “whole grains”. What if I told you there was not a shred of evidence that grains are good for human health? What if I told you the only evidence supportive of “whole grains” is that they are merely less harmful than regular grains? Grains had many benefits (e.g. easy to grow, easy to preserve, etc.) to the societies that first cultivated them, but to the detriment to individual health.

Question: What do you think happens when you let agriculture lobbyists influence nutritional guidelines?

A compelling narrative is a dangerous thing, especially when it’s wrong. That idea that eating saturated fat raises cholesterol, clogs our arteries and causes heart disease is such a well-trodden path it’s hard to imagine that it’s not true.

However, there’s no good evidence that this is the case and the original studies that prompted this belief were not far off outright fraud. We’ve spent 50 years and hundreds of millions of dollars trying to prove this hypothesis, and the best data consistently shows the opposite to be true.

What if I told you that - even if you believe the industry-sponsored studies that supposedly show how effective they are, which I don’t - for every 200 people that take statins, 199 get no benefit whatsoever. And the person that does benefit lives an extra couple of months. Statins do not save lives.

If it weren’t so tragic it would be funny. There correlation between raised cholesterol and heart disease is incredibly weak - people have heart attacks all of the time with ‘normal’ cholesterol.

We have discovered a drug that reliably reduces cholesterol levels - i.e. statins. However the catch is that artificially reducing cholesterol makes no difference whatsoever to the likelihood of having a heart attack. All of which wouldn’t be so bad if it was just a terrible waste of money, however, there are a long list of unpleasant side-effects.

It’s a multi-billion dollar a year scam. Eventually, statins will go the way of blood-letting and leeches.